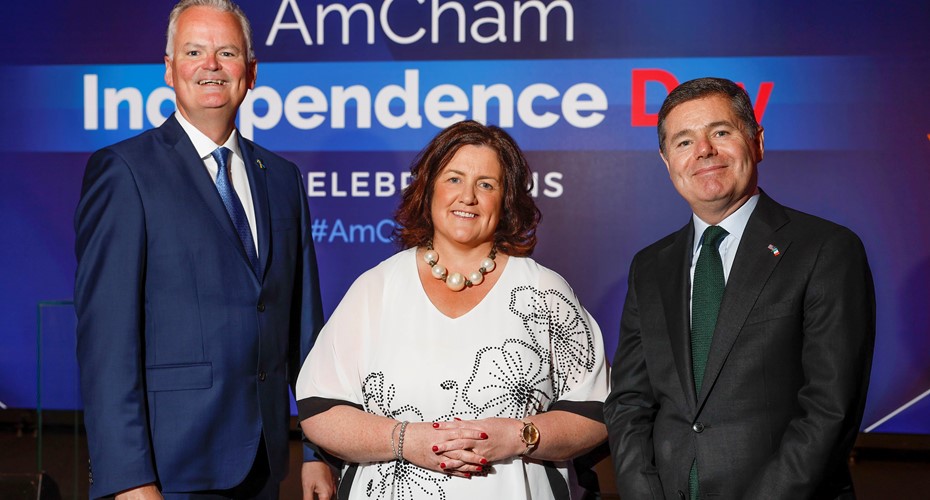 Minister for Finance, and President of the Eurogroup Paschal Donohoe spoke to AmCham members today, outlining the important of MNC’s to the Irish economy. Minister Donohoe said that there are: “400 million people directly working in the FDI sector, these are high paying jobs. In addition there are thousands and tens of thousands who are indirectly employed in Irish SMEs as a result of your collaboration with them.”

Minister Donohoe was speaking at the AmCham Independence Day celebrations today, where he attended as the Guest of Honour.

Speaking at the lunch Minister Donohoe said he met with US Treasury Secretary Janet Yellen in Washington last month on the OECD corporate tax agreement. He said: “While there are challenges to implementation on both sides of the Atlantic, each of us are optimistic that agreement on the two pillars of the OECD agreement will be reached and will be implements and I firmly believe it is in our interest for this to happen.”

AmCham President Catherine Duffy also spoke at the lunch and reflected on a number of key themes including: how Ireland has changed over the course of its first century of independence and as it embarks on the second century; the consequences of Russia’s brutal attempt to deprive the people of Ukraine of life, liberty and independence and; the implications of our nearest neighbour pursuing what it sees as a more independent path from the EU.

In her address to the attendees, American Chamber President, Catherine Duffy, said “Today, Ireland is a key and trusted partner of the United States in ensuring critical supply chains are maintained, Ireland is the ninth biggest source of inward investment for the US and Ireland is the only English-speaking, common-law gateway to the European Union for US business.

Independence, as it has benefitted Ireland, has not meant isolation or solo-runs. Instead, we have found that independence is strengthened through interdependence based on trust, as the world has been reminded through the Covid crisis and the invasion of Ukraine. The pandemic and the invasion of Ukraine remind us of the critical role multinationals play in safeguarding economies."

Catherine also highlighted the impact of US investment on the Irish economy, noting that US multinationals directly employ over 190,000 people and spend over €35 billion on payroll, goods, services and capital investment in the domestic economy each year.

“When you consider these numbers, it is not surprising that independent polling of the general public shows that 87 percent believe that Ireland needs to continue to attract US investment."

As AmCham marks US Independence Day and Ireland’s second century as an Independent nation, we do so acknowledging that the underpinning freedoms and liberties of our two countries are currently under attack in Ukraine.

Ireland advocates for the shared values of the European Union – human dignity, democracy, equality, the rule of law and human rights. From the experience of both the US and Ireland, we know that these democratic values will ultimately prevail. As we mark this important US holiday we also stand in solidarity with the people of Ukraine.